This is a little late, but we went back (again) with all our friends before finals week as a de-stresser before all the studying started.

And again Earl’s did not disappoint, I got the Italian and it consisted of Salami, Capicola, Roasted Ham, Mortadella, and Italian sauce. Just looking at the picture of the Italian right now is making my mouth water. It is as delicious as it looks. Once you take a bite out of it, the sandwich initially hits you with their signature style of artisan bread. The way Earl makes it is indescribable. The crunch of the top layer and the buttery-ness and softness of the inside layer just melts in your melt. Then the smokiness of the ham and the slight saltiness of the salami plays perfect harmony with each other…argh my stomach is growling as we speak. Not to mention again the way Earl compact their sandwiches, the instant you sink your teeth in you get nothing but a wave of delicious bread, meat, cheese, and sauce. Whew anyhoots, after the bite, their sauce just cleans the pallet helping the eater avoid dry taste. Definitely, if you get a chance go. Because the experience is different and amazing everytime. 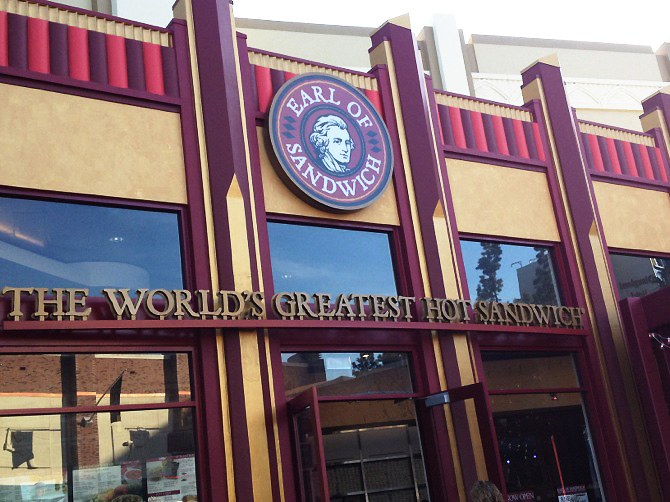 My friends have been raving about this place and we were FINALLY able to go to Disneyland to try it after the craziness of our first quarter at school!  I hadn’t heard about this place until our friends mentioned that the restaurant was opening up nearby.  After hearing it from a couple people about how good it is, I figured that it must be a place we should try (and how convenient that it’s located at our favorite place!).  Lets just say, we’ve been here twice in the past week.  DELICIOUS.  Our goal is to try a different sandwich every time we go here.

Earl of Sandwich is located next to the movie theater in Downtown Disney, next to the Disneyland Hotel and across from the ESPN Zone.  Inside, you order at one cashier, then walk down the long counter, and pay at the other end.  There are pictures of the 4th Earl of Sandwich, the guy who’s face is everywhere.  They will give you one of those buzzers to let you know when your food is made.  Most of the seating is outside in long benches.  I think my only con about this place is that their outside sitting does not accommodate for rainy weather.  It was raining today and we had to sit under the dripping water.  I’m going to say that they wanted to save money and go for cheaper outside covers since it doesn’t rain that much in SoCal.  At least they have heaters outside! 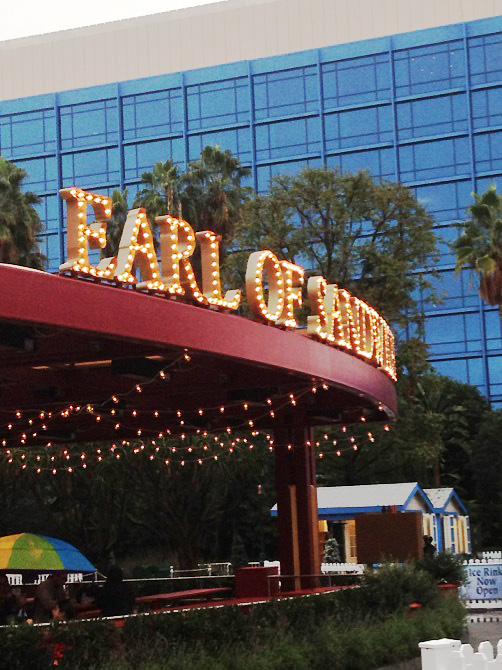 They have various types of sandwiches, wraps, salads, and desserts to choose from.  The drinks range from soda to tea.  For a list of the types of food they offer visit: Earl of Sandwich Menu.  It’s hard looking at all the types of food they offer and to decide on what you want to eat, especially when there is no one else in line!  Or at least I thought so.  I’m the type of person who feels pressured when it’s my turn to order and I still don’t know what I want.  I know I should just tell them I need more time, but I end up blurting some random thing and usually regret it later (sighhh).  Note to self: don’t do that.

The first time we went, Mark had the Full Montagu and I had the Chipotle Turkey Avocado. 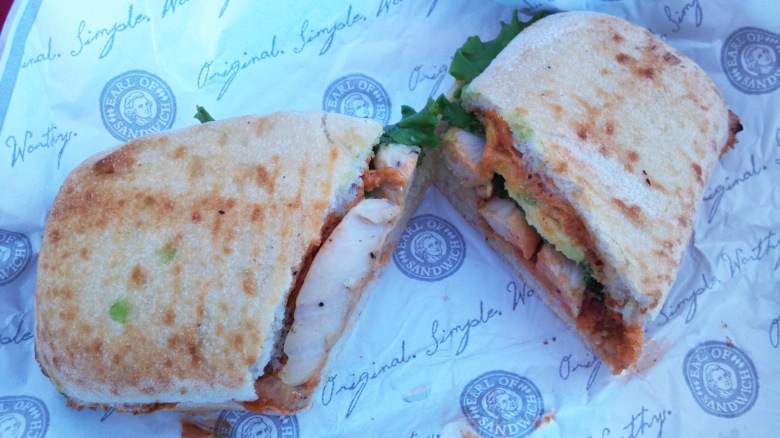 The Chipotle Chicken Avocado is basically what the title says, and also has a hint of cheese and bacon.  I’m don’t like bacon (cue gasp for many of you) sooooo I ordered it without the bacon.  This sandwich isn’t on the menu that’s posted on the Earl website, so I’m guessing that this might be just at the Disneyland location.  As my first sandwich, I really enjoyed it.  Like many people have said, the bread pretty much makes the sandwich.  The bread… just the right amount of crispy and soft, not too strong of a taste, which compliments the sandwich.  Earl of Sandwich advertises their sandwiches as the world’s best hot sandwiches and I say that these have been the best hot sandwiches I’ve tasted so far.  Sometimes when restaurants toast their sandwiches, they either make it too hot, where everything is a gloopy, hot, saucy mess, but Earl is just the perfect amount of warmth.  The chipotle sauce wasn’t too spicy, and added a good amount of spice and flavor to the rest of the sandwich.  I was very happy with this first sandwich.  (And I love avocados!!!) 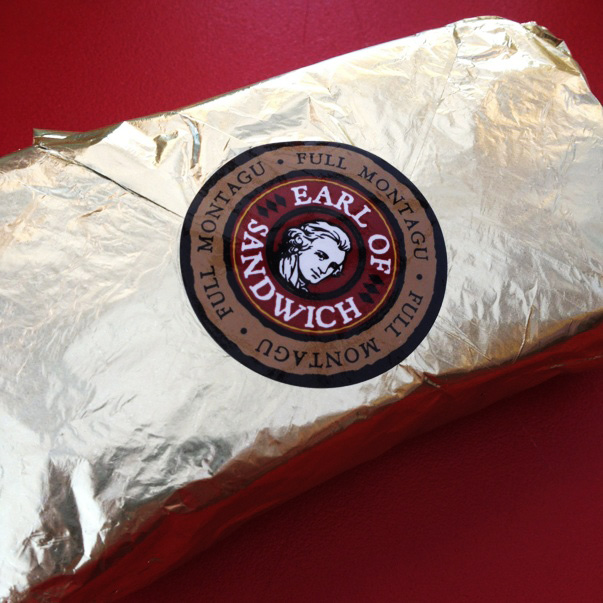 Mark was a little too excited about his sandwich so we don’t have a picture of the sandwich.

Mark – Coming into Earl’s, I had high expectations. I thought that a sandwich was nothing more than a sandwich. That Earl’s was gonna be just a Subway sub. I was proven wrong. I didn’t know what to order so I ordered the Full Montague. It had the whole baggage. Fresh Roast beef, TURKEY, two different types of cheese, ripe for the eating, lettuce (so fresh and so cleanzy), Tomato, and of course their secret sauce. It was amazing!!! I liked how the sandwich was all squished together making the turkey and roast beef have its own particular flavor, and given how it was a hot sandwich…YUM!!! It was if there symphony in my mouth…starting with the intro then a dive into little delicate notes. These delicate notes were the lettuce, and tomato. For the finally, the sandwich hits you with its secret sauce letting you know your not gonna get this sandwich anywhere else in the world. A happy experience.

Our second trip to Earls was on a rainy Friday, when we found out that the covers outside don’t block out the rain.  We are having a hard time eating and thinking about other sandwiches (which the exception of this one sandwich because the garlic sauce is BOMB). 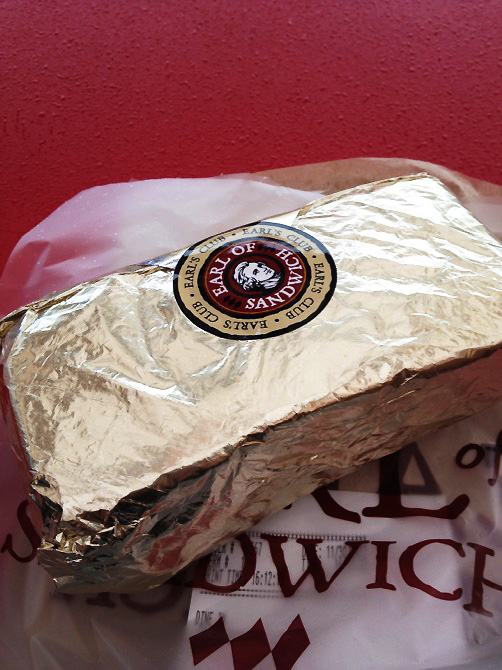 I had the Earl’s Club, which has turkey, bacon, lettuce, tomatoes, swiss cheese, and sandwich sauce (which is similar to thousand island dressing). 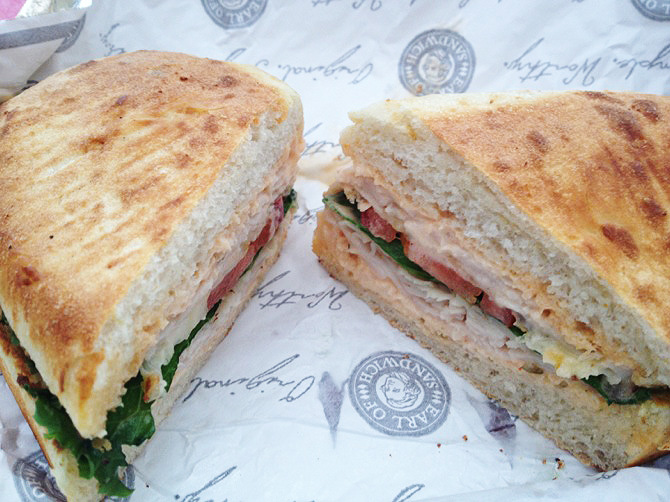 Delicious!  It’s simple, but satisfying!  Like I said before, the sandwich is warm, but not too warm.  The sandwich sauce (which reminds me of In n Out) tied the sandwich together.  I also like how this sandwich is smushed… that’s probably not the best way to describe it… Mark said compressed.  I’m not a big fan of sandwiches that have 10 pounds of meat and everything else stuffed in between the two breads, so this sandwich is perfect for me.  If I had to choose between this sandwich and the Chipotle Chicken Avocado, I would have to say this sandwich.  I loved the sauce and the veggies they used (but I love avocados!  ARGH.  Such a hard decision to make…) and I do love turkey in sandwiches. 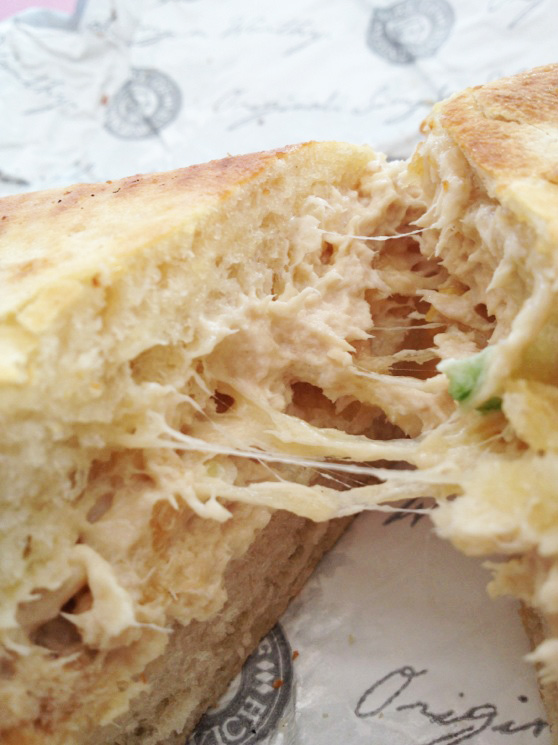 Mark – Anyhoots, this sandwich was a glorious surprise of tuna. Everything was in sync. From the beginning bite into their signature bread, the taster tastes the crunchiness of the top layer and the softness of the inside layer helping the taster transition carefully into the tuna. Once you get to the tuna, it is mostly a harmonious experience seeing how all the flavors just go well together. The tuna has a smooth salty taste, letting the taster have it linger before one takes another bite. The sauce within the sandwich just puts you into a happy slumber, knowing that all your problems had gone away after the initial taste. It has the typical ingredients for a tuna melt…tuna, bread, sauce, and a little bit of magic.

Each sandwich costs $6.99.  A lot of reviewers on Yelp were saying that why go to Subway, when Earl costs about the same, but is 294082439 times better?  I agree.  The only thing is Earl of Sandwich is a lot farther than Subway.  I can think of at least 3 Subways off the top of my head.  I will milk it for as long as I have my Disneyland pass!

Note: There is a 10% discount if you have a Disneyland pass and a 15% discount for a AAA card.

We will probably be back in the near future to try more sandwiches and we’ll add our reviews here of each new sandwich we happen to try!  If you’re near any Earl of Sandwich, go check it out!

Error: Twitter did not respond. Please wait a few minutes and refresh this page.